Architected for Reliability. Optimized for Performance. 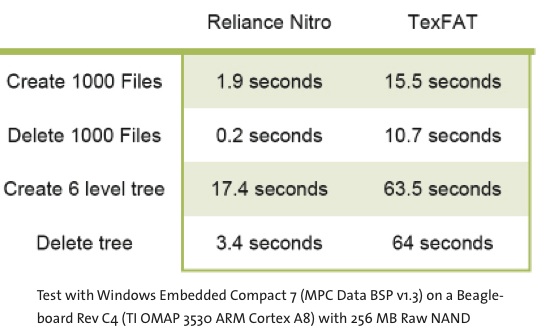 The tree-based directory structure of Reliance Nitro enables much faster file operations than TexFAT, particularly when working with many small files. In a side-by- side test creating 1000 small files, then opening and deleting them, Reliance Nitro demonstrated much faster operational performance over TexFAT. The test also measured the time to create and delete a directory tree. As the results demonstrate, the way a file system handles metadata makes a big impact on device responsiveness. 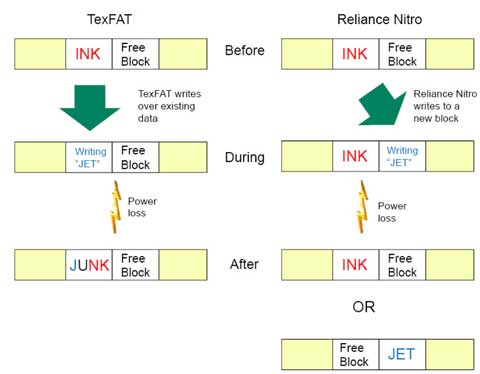 Reliance Nitro is designed to withstand the harsh conditions and fluctuating power of embedded environments. During file updates, Reliance Nitro writes the data to a new block, leaving the original file intact, whereas TexFAT writes new data directly over the original file. When power is interrupted or the system fails, TexFAT files being written could be incomplete or corrupted. Since Reliance Nitro always leaves data in a known good state, the files remain corruption free, and incomplete writes automatically return to their stable former state. If the write transaction completes prior to the failure, the original (old) file is deleted. 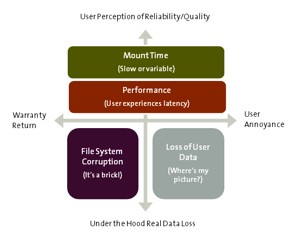 Device reliability is multi-faceted; implications include everything from device corruption to a less than optimal user experience, creating real-world problems ranging from warranty returns to general annoyance, the enemy of customer loyalty. Because Reliance Nitro is a transactional file system, live data is never overwritten, making the system extremely fault tolerant, even after an uncontrolled system shutdown caused by power loss

Customizable for Any Use Case

Every file system must balance the tradeoff between data-at-risk and maximum data throughput. Only the Dynamic Transaction PointTM technology found in Reliance Nitro gives device manufacturers total control to find the ideal balance for any use case. This capability makes field upgrades fail-safe, for example, as these applications must update several files in an atomic fashion. If a power interruption were to occur before the update is complete, the application may not recover. This is easily accommodated with Reliance Nitro’s run-time configurable transaction points, where TexFAT falls short.

Datalight is the software expert for reliable data storage on devices. For over 25 years, Datalight has provided trusted solutions that have been deployed across all segments of the embedded industry—from cellphones to satellites to submarines. Our patented products have been proven to speed time to market for development platform and device manufacturers.