Datalight provides pre-written software support for Linux, Android, Windows Embedded, and VxWorks operating systems and developer tool sets. For developers who use any other 32-bit real-time operating system, such as Express Logic ThreadX, Mentor Graphics Nucleus and ENEA OSE, an RTOS Porting Kit is available for both Reliance Nitro™ and FlashFX® Tera. For simplified integration of Datalight file systems, a stand-alone file system interface with function calls that are based on the POSIX standard helps OEMs bring their products to market faster.

How does the Datalight POSIX layer simplify RTOS porting?

Integrating system software and hardware with an operating system is not a trivial task, requiring both experience and detailed documentation. The Datalight POSIX layer allows engineers to port Datalight products to any 32-bit RTOS without needing specific expertise with the operating system’s file system interface. 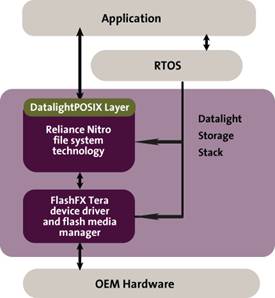 For which Datalight products are RTOS porting kits available?