Datalight Reliance Nitro™ is a two state flash file system, comprised of the working state and the committed state. Original data (the committed state) is preserved until the new data (the working state) is written and a transaction point is performed. During operation on the working state, all file system modifications - including changes to directories, files and metadata - are stored on an area of the media that is currently unused and does not contain committed state data. The possibility of corruption is eliminated because the data of the new transaction is written to an unused portion of the media. Writing to an unused portion of the media allows the previous state of the file system to be untouched. Valid data from the previous transaction is always available.

When testing an embedded file system for performance, it is important to consider data beyond just reads and writes.

Because Reliance Nitro always maintains a “known good state,” it has a mount time advantage particularly after power loss. In situations where there is random I/O penalty such as in Hard Disk Drives and e•MMC this advantage is magnified. Journaling file systems such as ext3 and ext4 will need to perform random reads to build the journal. Since Reliance Nitro always keeps the disk in a known good state there is no need to run integrity checks during the file system boot, even after a disorderly shutdown. 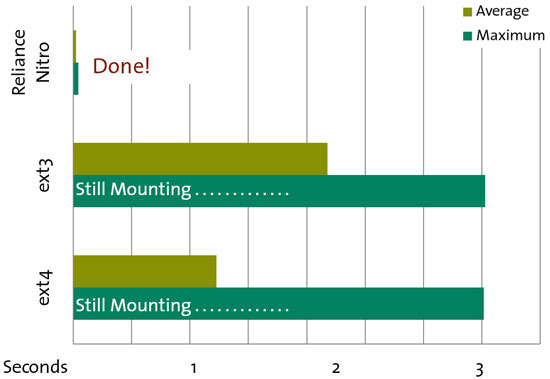 Trees are used for varying purposes in Reliance Nitro:

Leaf Node
Leaf nodes are where the data associated with a key is actually stored.

Advantages of a tree-based design

Datalight Reliance Nitro™ with Dynamic Transaction Point™ technology is a multi-threaded, fault-tolerant embedded file system, offering control of the performance and data at risk balance. Reliance Nitro embedded file system integrates easily into your system without application modifications. Its unique application-controlled transaction points lets Reliance Nitro users achieve ultimate reliability and performance, responsive to every nuance of your unique use cases. Unlike default solutions, such as FAT-based file systems which are built on the faulty foundation of 1980’s desktop file systems, Datalight Reliance Nitro has been specifically designed for flawless operation on the full range of modern storage technologies, including NAND flash memory.

Get the Reliance Nitro Datasheet