FreeRTOS does not include a virtual filesystem (VFS). This means a program using Reliance Edge must directly call the Reliance Edge public API’s instead of using a VFS interface such as fopen().

Besides Reliance Edge, the two popular filesystems used on FreeRTOS are FatFs, developed by ChaN, and FAT SL (Super Lean).

For a generic comparison of Reliance Edge vs FAT and other file systems, see the Product Introduction of the Reliance Edge Developer's Guide.

Performance of Reliance Edge on FreeRTOS

FreeRTOS file system, Reliance Edge, delivers strong read and write performance, compared to FatFs and FAT SL on FreeRTOS. It also prevents data loss due to power interruption, something that that FatFs and FAT SL are vulnerable to.

The test used here was Datalight’s general purpose file system I/O test (FSIOTest), which measures a variety of file I/O types and works with virtually any file system. Each file system was configured to use a 4096-byte block size. In the real world, especially in IoT devices, I/O sizes are often small, so the performance advantage offered by Reliance Edge when the write sizes are smaller than the block size is particularly meaningful.

Reliance Edge was configured to transact on fsync, file close, disk full and volume dismount. For the Fat Fs file system, the “fast seek” feature was enabled, which caches many of the FAT entries to improve performance. FAT SL does not have that option, and overall performance suffered as a result. 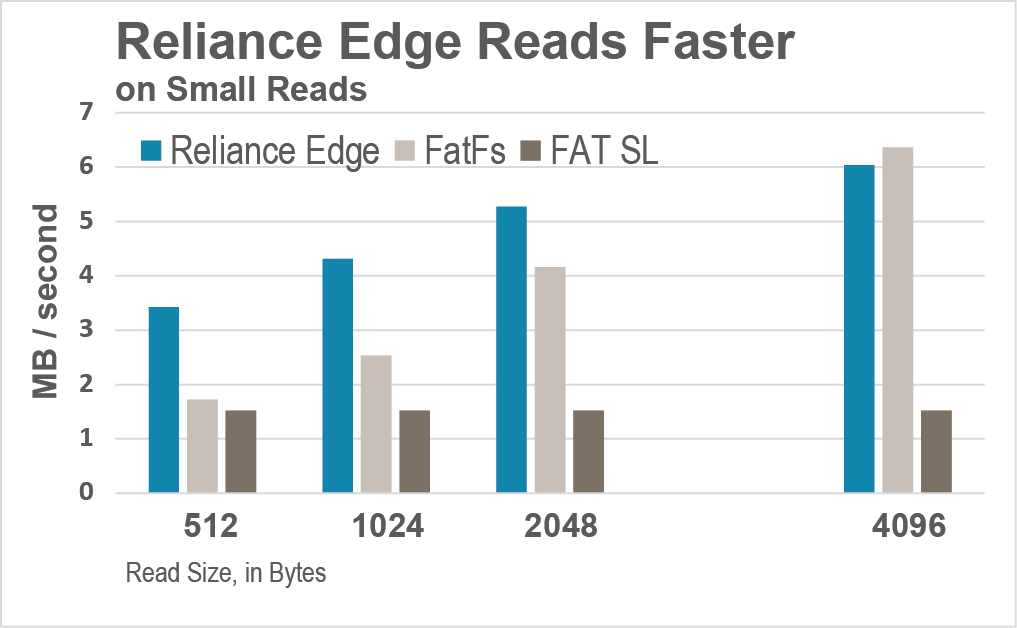